A solar flare is a very bright region in the Sun, which emits radiation over a broad range of wavelengths and is clearly visible in the X-ray (and sometimes also in the gamma-ray) range.  Indeed, solar flares are the brightest sources of X-rays visible from the Earth, although this is only possible with the use of space instruments.  The reason is that the Earth atmosphere (luckily) screens us from X-ray and gamma-ray radiation.

Sometimes, a flare is accompanied by the emission of a large amount of mass, called Coronal Mass Ejection (CME).  While the X-rays travel in straight line at the speed of light, the charged particles emitted during a CME follow the magnetic field lines connected with the emission region.  When these lines are connected to the Earth magnetosphere, these charged particles can also reach the Earth, typically producing spectacular phenomena like the polar aurorae.  Sometimes they also create troubles to telecommunications, airplanes and, in the most intense and rare cases, even black-out in the regions closest to the Earth poles.

As the solar magnetic field looks like a wavy spiral moving outward across the entire solar system, these particles follow a much longer path than X-rays and, when they reach the Earth, they arrive significantly later than the X-rays.  This makes it possible to exploit solar flare detections to send alerts that are very useful to mitigate the risk of dangerous side effects.  Hence, the study of solar flares is an important part of the Sun-Earth connection (the so-called space weather). 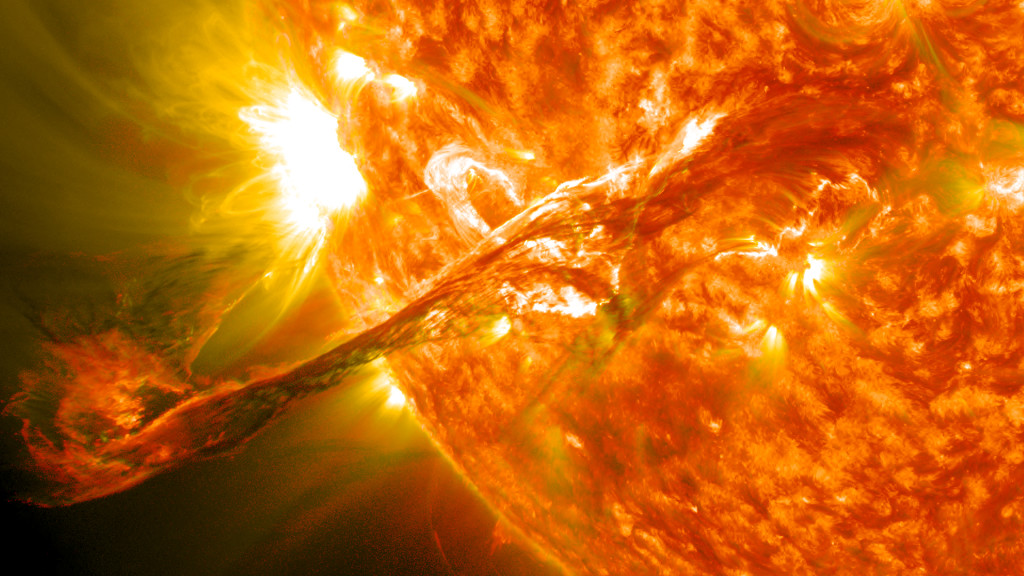 On August 31, 2012 a long filament of solar material that had been hovering in the sun’s atmosphere, the corona, erupted out into space at 20:36 UTC. The coronal mass ejection, or CME, traveled at about 1450 km per second. The CME did not travel directly toward Earth, but did connect with Earth’s magnetic environment, or magnetosphere, causing aurora to appear on the night of Monday, September 3.
The picture is a lighten blended version of the 304 and 171 angstrom wavelengths. Cropped
Credit: NASA/GSFC/SDO
NASA image use policy.
NASA Goddard Space Flight Center